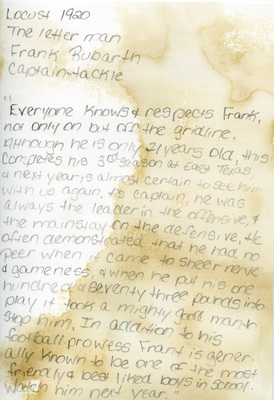 The reverse side of a black and white photograph. [handwritten inscription] Locust 1920 The letter man Frank Rubarth captain-tackle. "Everyone knows and respects Frank, not only on but off the gridline. Although he is only 21 years old, this completes his 3rd season at East Texas & next year is almost certain to see him with us again. Ast captain he was always the leader in the offensive & the mainstay on the defensive. He often demonstrated that he had no peer when it came to sheer nerve & gameness & when he put his one hundred & seventy three pounds into play it took a mighter good man to stop him. In addition to his football prowess Frank is generally known to be one of the most friendly & best liked boys in school. Watch him next year."