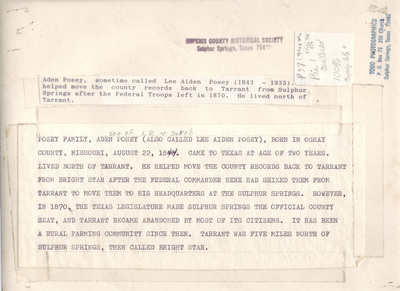 The reverse side of a black and white photograph. [typed caption, top] Aden Posey, sometime [sic] called Lee Aiden Posey (1843-1933) helped move the county records back to Tarrant from Sulphur Springs after the Federal Troops left in 1870. He lived north of Tarrant. [typed caption, bottom] Posey Family, Aden Posey (also called Lee Aiden Posey), born in Oshay County, Missouri August 22, 1844. Came to Texas at age of 2 years. Lived north of Tarrant. He helped move the county records back to Tarrant from Bright Star after the Federal Commander here had seized them from Tarrant to move them to his headquarters at Sulphur Springs. However, in 1870, the Texas Legislature made Sulphur Springs the official county seat, and Tarrant became abandoned by most of its citizens. It has been a rural farming community since then. Tarrant was five miles north of Sulphur Springs, then called Bright Star.